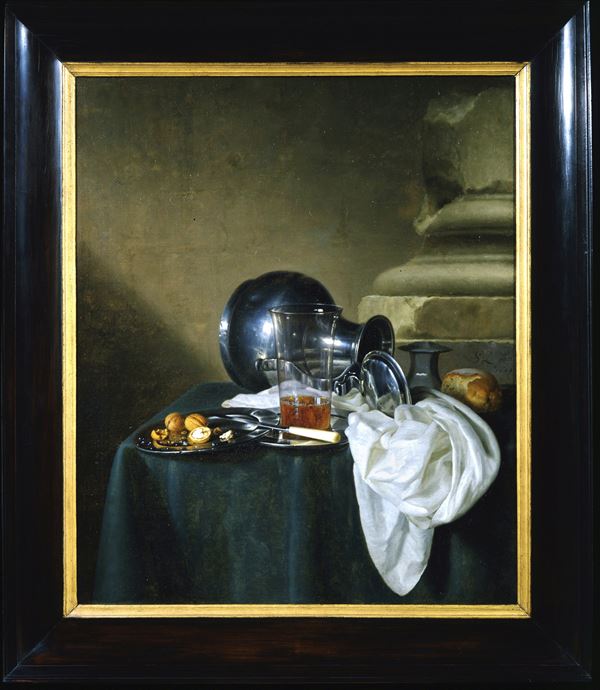 Provenance:
C. J. Bonde, Ericsberg, Sweden (recorded there in 1886: see Granberg). (The painting may have been at Ericsberg castle earlier, as a group of old master paintings belonging to Per Lagerbring (1732–1799) was bought by David Henrik Hildebrand, owner of Ericsberg, whose estate passed to the Bonde family.) The Bonde family sold the painting at Sotheby’s, London, 5 July 2006


The recent emergence of this finely preserved still life alters, yet again, our notion of quality in seventeenth-century Dutch still life. Of all periods and genres, Netherlandish still-life painting lacks a complete sense of canon and chronology, in part because ideas of development and progress are comparatively unimportant. The work of many painters can be uneven, while at the same time we are often surprised by individual masterpieces by little-known painters like Simon Luttichuys. Still life remains a field where collectors and the art market play leading roles in defining our understanding of the genre.

This painting, first recorded in 1886, is quite different from Simon Luttichuys’ other work. Just a few years earlier, in 1646, the artist created an impressive trompe-l’oeil painting (in the Heinz Family Collection) which celebrates the powers of illusion and the talent of artists. Less concerned with such external intellectual references, the painting with French & Company presents boldly brushed, monumental forms.

Atop a table are an upturned pewter jug, a plate of walnuts, a glass of beer, a white cloth, and a bread roll. Perhaps this still life represents the remains of drinking and snacking. Terms like “ontbijtje” and “banketje” (loosely meaning “breakfast” and “meal”) sometimes appear in Dutch seventeenth-century inventories, but frankly we have no idea what kinds of specific arrangements they described. Moreover, in this image, the situation and the specific objects may be beside the point. More appropriate might be other contemporary descriptions that simply call such an arrangement “fallen” (omgevallen). Indeed, here Luttichuys constructs an entirely independent world governed by light and texture. He ingeniously forces us to compare various types of metal: the luminous pewter of the jug – partly seen through glass, the duller tone of the salt cellar at right, darker plates in front, and the steel of the knife blade at center. All these materials are carefully distinguished. The artist also pairs colors rhythmically: the walnuts and the bread are almost the same shade of tan, and the streak of light from the upper left is continued by the brilliant white linen napkin. Even the delicate foam on the beer (the residual froth of stale beer?) is echoed in the scattering of salt near the split walnuts. Refractions through glass play against reflections off metal. And finally, while the objects on the table are precisely rendered, the column and wall behind are more roughly and energetically dabbed. The still life balances a monumental simplicity with subtly gradated tones.

In this canvas, Luttichuys has been influenced by the work of Jan Jansz den Uyl – an equally unfamiliar painter until a masterpiece by him emerged in similar fashion in 1984, also from a Scandinavian collection and also through French & Company (now in a private collection, London). The artist was also closely connected with Jan Jansz Treck and may have studied with him; in 1661 Luttichuys declared that he “overpainted and improved” (overschildert en vermeerdert) a still life by Treck. Where the canon of table top still lifes once consisted of Pieter Claesz, Willem Heda, and Willem Kalf, we can now appreciate that other artists made great work. Indeed the question of influence seems of little relevance – does it really matter that Luttichuys’s still life dated 1649 was produced under the influence of Den Uyl’s paintings of the 1630s? What matters more are Luttichuys’s individual contributions: his more luminous tone, more central composition (the beer glass is perfectly centered), and richer impasto.

Born in London to Dutch parents, Simon Luttichuys probably settled in Amsterdam in the 1630s, along with his brother Isaac, a portraitist. Luttichuys seems to have had a good reputation during his lifetime. In 1658, the English writer, William Sanderson, praised Luttichuys by using a quaint early term for still lifes and Anglicizing the artist’s name: “And in dead-standing things, Little-House, a Dutchman.” The prominent Leiden collector Francois de la Boë Silvius owned four still lifes by Luttichuys. After Luttichuys died in 1661, no less a figure than Willem Kalf finished one of his pictures. Some of this fame was recovered with the reappearance of this still life, which Souren Melikan called “a masterpiece out of this world.”

The seventeenth-century ebony frame with gilded inner bead is apparently original to the painting. The still life is also on its original support