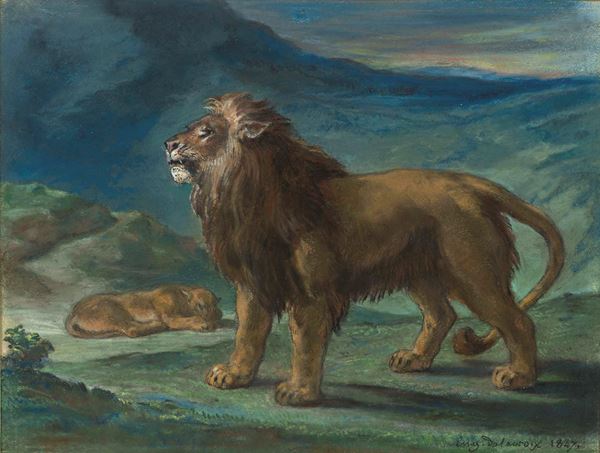 
Beginning in the 1830’s, Delacroix regularly visited the zoo in the Jardin des Plantes, sketching alongside his friend Antoine-Louis Barye, the animalier sculptor. Lions became a central subject for him during the second half of his career, as he reacted to the expressive potential of the great cats

Delacroix usually depicted lions stalked by Arab hunters or attacked by mounted horsemen. In smaller works that were popular with collectors and dealers, Delacroix showed lions fighting snakes and alligators, or devouring hares. Delacroix’s fascination with lion subjects culminated in his large Lion Hunt painting made for the 1855 Exposition Universelle, which was to be his last public triumph. Contemporary critics did not always appreciate the violence in these paintings, which nonetheless confirmed his reputation as the leading Romantic artist.

In Lion and Lioness in the Mountains, Delacroix concentrated on the inherent nobility the lions, depicting a standing male and lying female. Flecks of white chalk highlight the mouth, eyes and ear of the lion, and rich browns describe the thick mane, muscular body and nervous tail. Looking out into the distance, the lion is silhouetted against a distant blue-green mountain range, reminiscent of the Atlas Mountains that Delacroix saw during his 1832 trip to Morocco. In his diary entry of January 21, 1847 Delacroix most likely refers to this pastel: “Stayed home all day. [Drew] the pastel of the lion for the flood victims.” Lion and Lioness in the Mountains would have been made as a gift for charity.

The depiction of the landscape, and the integration of the subject within it, was of great importance to Delacroix. A life-long admirer of Peter Paul Rubens, Delacroix faulted the Flemish artist for his overly complex compositions. In 1846, Delacroix visited Bordeaux and most likely saw Ruben’s Lion Hunt, which had been brought there from Germany by Napoleon’s armies. Delacroix was familiar with Rembrandt’s Lion prints, writing in his Journal: “With Rembrandt indeed – and this is perfection itself – the background and the figures are one.”

As the most important colourist of the mid-19th century, Delacroix was attracted to the velvety softness and deep colors of pastel. He used pastel for landscapes, floral studies and finished religious and mythological scenes. Lee Johnson wrote “Delacroix's career fell in a period between two golden ages of pastel”, bridging the gap between masters of the medium such as Maurice Quentin de la Tour in the 18th century, and Edgar Degas and Odilon Redon a century later. Degas owned a number of Delacroix's works in the medium, including a finished pastel of An Arab Stalking a Lion.

Delacroix produced about 100 pastels, a relatively small number for such a prolific draftsman. The medium's fragility means that of these, very few finished works still exist, and fewer still in near perfect state of preservation.