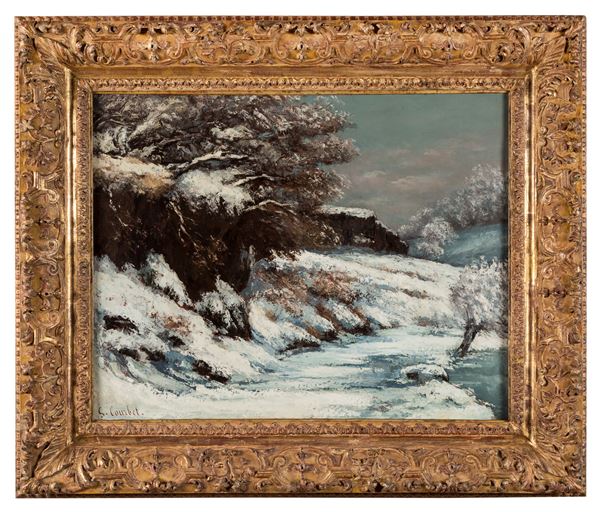 
Gustave Courbet painted Effet de neige in his native Ornans region of eastern France during one of the uncommonly cold and snowy winters that marked the years around 1866-68. Glorying in the challenge of dismal weather conditions, and supremely confident in his very individual, aggressive painting technique, Courbet was undeterred by the nearly total lack of precedent for snow scenes in French painting history. Effet de neige is one of the most brilliantly realized of what would ultimately be some eighty snow scenes that the artist painted in the Jura mountains or, after his self-imposed exile, in the Alps. Drawing on color schemes he had introduced earlier in the 1860s, Courbet laced steely-blues and soft salmony-browns through a whirlwind of tinted whites and harsh blacks to create a color palette that was unmistakably his own - and absolutely on the note of his wintry imagery. To carry his audience into the experience of a landscape that he felt as much as saw, Courbet brought to play all the unusual tools that he had earlier developed to depict damp leafy forest interiors or crashing seacoasts. In Effet de neige soft, extra-large brushes sweep the surface of a hard icy pool or trace the slick track of snow collapsing over a river bank; palette knives and spatulas of varied widths build up the intermingled layers of wet oak leaves, crumpled ferns and packed, refrozen snow; sponges and blotting rags both soft and stiff convey the feathery burst of an ice-coated willow tree or suggest the veil of snow falling through a distant stand of trees. For Courbet, the snow-covered limestone ravines and slushy streams of his homeland were a compelling subject matter uniquely suited to his immense ambitions; he quickly made the icy mountain landscapes of the Jura a personal trademark.

Earlier, during the 1850s, Courbet had puffed and preened in the role of bad boy of French realist painting, constantly calling attention to his own daring and confidence with unbelievably large paintings, bold (usually bloody) hunting scenes, and provocatively naked nudes. Although he would never completely abandon the socially and politically disconcerting subject matter with which he first made his name, by the mid-1860s Courbet felt less need to provoke and enjoyed greater confidence in his painterly skill. Along the way, he had made of himself one of the most gifted colorists and certainly the most inventive technician in a school of superb painters. The interest in pure landscape painting that he had announced as early as 1855 in his monumental Studio of the Painter (Paris, Musée d'Orsay) became the driving passion of Courbet's art during the second half of his career. Although Courbet was largely motivated by his genuine affection for the French countryside, he never ceased to cultivate the broad, international market for the work of the "New French School of Landscape Painters" - an appellation that pulled together the disparate paintings of Courbet, Camille Corot and Théodore Rousseau, among others, throughout the 1860s and 1870s. Always working individually (but also fully aware of the work of his contemporaries and rivals in Barbizon or on the Normandy coast), Courbet sought out unusual landscape subjects that he might claim as his own discovery, whether by birthright (as in his startling views of the deep caves and limestone ravines of his native Jura) or by dint of his brilliant artistic intuition, as in his popular crashing waves. For the cycle of Effet de neige paintings - both the pictures which feature the always popular deer and stag groups, and, as here, the more daring, pure landscape compositions - Courbet brought together all his ambitious talents in paintings that more fundamentally shifted the course of French painting than he had ever done with his large Salon machines of the 1850s. If few French painters had tackled the snow-altered landscape before Courbet, no landscape artist of subsequent generations from Monet and Pissarro through Cézanne and Gauguin on to Braque and Derain would consider their oeuvre complete without winter scenes.