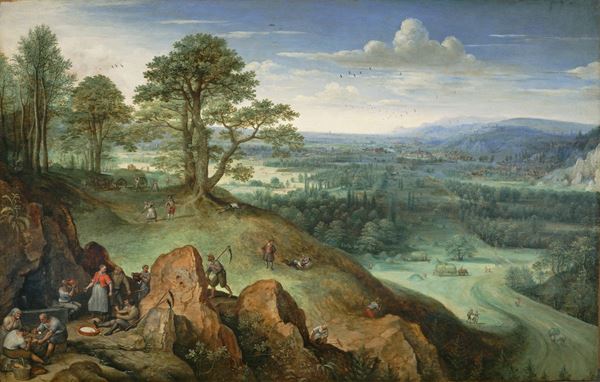 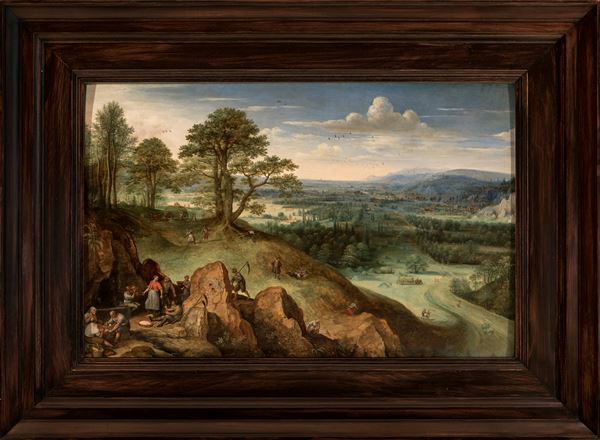 
Lucas van Valckenborch is one of several late sixteenth-century painters whose sweeping vistas were aptly described by Walter Gibson as `world landscapes'. Following in the footsteps of Pieter Bruegel the Elder and Joachim Patinir, Valckenborch created landscapes that encompassed both the most mundane details of daily life and the most awe-inspiring views of the natural world. His paintings draw the viewer to the horizon with an almost vertiginous perspective, at the same time encouraging close inspection with the fineness of their execution. In the days before airplanes and observation decks, paintings such as these provided a dramatic viewing experience; they also suggested something about man's place within the universe.

The vogue for mountain views such as Summer: the Harvest (`Le Repas de Paysans') stemmed largely from Bruegel's mid-sixteenth-century alpine studies, which were widely disseminated throughout the Netherlands as both paintings and prints. Valckenborch painted many such views over the course of his career but few are as finely executed or as well preserved as Summer. The composition is designed to emphasize the vastness of the view. The division of the landscape into three distinct zones leads the eye from the foreground left to the background right and figures placed throughout the landscape accentuate the recession of space. They are all engaged in the harvesting of hay. Scythes, rakes and pitchforks appear alongside mounds of freshly cut hay and horse drawn carts. The figures in the foreground have paused to eat and drink and Valckenborch's depiction of details, among them the expression of the seated man leaning against the rock and the draping of the woman's apron to his left, attest to his considerable powers of observation. Humorous details in the middle ground - the man asleep face down under a tree and the woman relieving herself behind one of the rocks - hold the viewer's attention and lead the eye over the hill and into the valley below where haywains, piled high, move towards the road. The detail with which Valckenborch describes the rock face and foliage in the foreground is so gradually loosened that tree branches and roof lines can be seen even in the far distance.

Summer: the Harvest was sold in 1869 as a pendant to a scene of elegant figures dining and dancing in a forest clearing (`Le Festin Seigneurial'). In that scene the flowers that cover the ground and the garlands woven by several women and children identify the time of year as Spring and it seems likely that the two paintings were originally part of a series of the four seasons. Both compositions are divided into zones with the foreground at the left and the background at the right, while the swell of the middle ground in Summer provides a contrast to the depression of a lake in Spring. Series of the seasons were popular in the Netherlands in the sixteenth and seventeenth centuries, suggesting both the passage of time and the bounty of God's creation. Valckenborch depicted the theme of the seasons in both landscapes and large-scale market scenes in the tradition of Pieter Aertsen and Joachim Beuckelaer. In the latter it is not the landscape but its harvest that suggests the cycle of the seasons.

Valckenborch was born in Leuven into a family of painters and in August 1560 joined the Guild of St. Luke in Mechelen. He had established a studio by 1564, when Jasper van den Linden is recorded as his pupil. His subsequent moves to Liège, Aachen, Antwerp and, finally, Frankfurt, reflect the political instability of the period, but Valckenborch remained active in the cultural life of the Spanish Netherlands throughout his career, as evidenced by his appointment in 1579 as court painter to Archduke Mattias. Van Mander singled him out for praise not for his landscapes but for his archducal portraits, six of which survive, some in miniature and others life-sized, a further testament to his versatility as a painter. Around a hundred paintings and ten drawings by Valckenborch are known today.