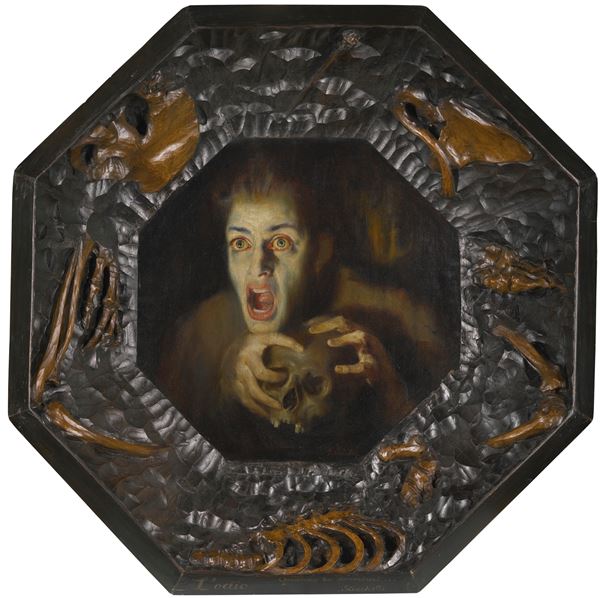 
After digging in the soil, a deranged man with bloodshot eyes and a ghoulish complexion has reached his goal. Scattered around him is the skeleton of the woman who scorned him in life. His hatred for her unabated, he has unearthed her remains, which he plans to nail to a pillory. Holding her skull and poking the eye socket with a long finger, he opens his mouth and lets for a scream.

This unsettling 1898/99 image by the Serbian artist Pasko Vucetic and frame by Victor Kovacic was inspired by a 1877 poem entitled Il Canto del Odio (The Ballad of Hatred) by the Italian poet Olindo Guerrini whose nom de plume was Lorenzo Strecchetti. Vucetic painted the work as a struggling young artist in Munich. The octagonal, ebonized and polychrome frame was added a few years later, after the painting was exhibited at the Serbian pavilion at the Paris Exposition Universelle de 1900, and a 1901 exhibition in Trieste. By 1904, Hatred and Madness – presumably with its frame – had been sold to an Italian collector, disappearing for over a century from public view, and exhibitions and literature on European Symbolism.

Many European fin-de-siècle artists were fascinated with the sinister. This trend, which is today called Dark Romanticism, had its origins in the macabre works of Goya and the nightmarish scenes by Fusseli. Later 19th century artists such as Moreau and Redon in France; Knopff and Ensor in Belgium; Munch in Norway; Hodler in Switzerland; and Böcklin and Stuck in Germany painted images that reflected a tension between Eros and Thanatos; ecstasy and terror; and women and sin. With the appearance of Vucetic’s and Kovacic’s work, the geographical reach of these themes extends to Serbia and Croatia.

A practice common to many Symbolist artist was the integration of the frame into the work, and the work into its setting. Here the union of the fine and the decorative arts is complete. Around the deep cove of the frame whose gauges resemble soil, the madman has strewn the rib cage, fibula, hand and hipbones of the lover whose painted skull he holds. At the top of the frame is the nail pin he will use to complete his gory deed. By extending the frame deep into the viewer’s space, we are engulfed in this nightmarish act.

The responses of many artists to the end of the 19th century included world’s end expectations and prophesy of doom and decline. The books of Edgar Alan Poe continued to be popular. In 1897 Bram Stoker completed Dracula and in 1899 Freud published The Interpretation of Dreams. Wagner and Straus, meanwhile, entertained and frightened audiences with bloody and bizarre operas, and the philosopher Nietzsche predicted approaching catastrophes.

Today, these themes often lead to box office success, as witnessed by the popularity and price of Munch’s The Scream. As Vucetic’s madman opens his mouth in a similar gesture, we may feel a similar shiver of terror.