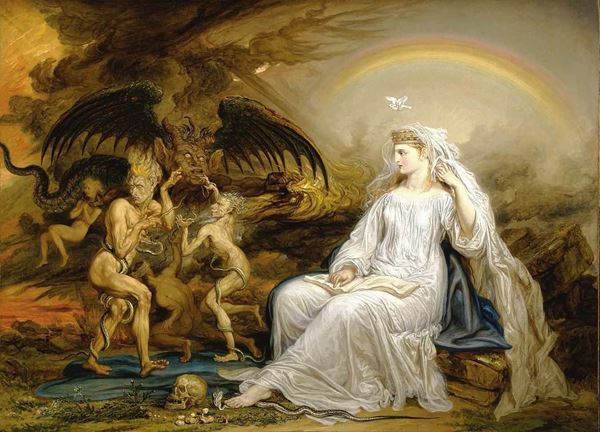 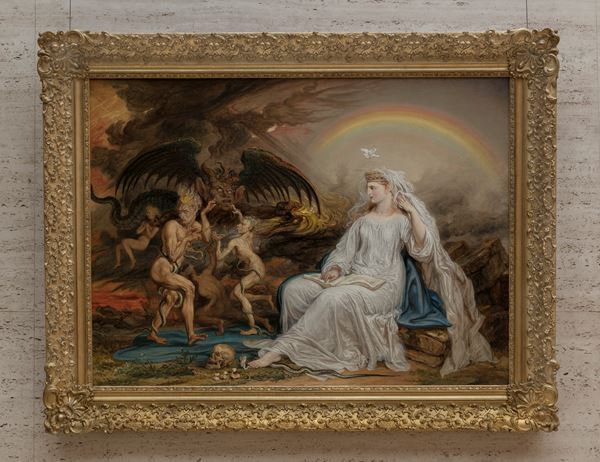 
James Ward is famous for his bravura, often anthropomorphic paintings of animals, but he always sought to present his work in a dramatically elevated setting that epitomized the Romantic movement of his day. He considered allegorical painting to be the most important form of artistic expression, and the present work is a significant example of Ward boldly tackling an elevated allegorical theme.

Ignorance, Envy and Jealousy is a powerful dramatization of the conflict between good and evil, and the full title given in the Royal Academy exhibition of 1838 was Ignorance, Envy and Jealousy filling the throat and widening the mouth of Calumny; endeavouring to bear down Truth as an unshaken Pyramid founded on a rock, appearing in the catalogue with a quote from an obscure poem, Vide The Den,
by Molus Burrowdell. Ward was clearly staking his claim as a painter of greater artistic and imaginary scope than a mere animal painter and it is thought that the present work was painted to challenge a reviewer who in 1835 had claimed that `His riches are in horses and cattle and he should not quit the farm'. Aside from obvious associations of this critic to ignorance, envy and jealousy, the painting poignantly reveals Ward's belief in the perpetual state of conflict between good and evil, truth and light being the ultimate means to salvation, as Edward Nygren (op. cit.) makes clear.

In the composition Ward presents Truth, dressed in white, a bride to her religion, exhorting the writhing chaos of Calumny, Ignorance and Jealousy on the left to repent, directing their attention to the Bible in her lap. The lightness of touch in the brushwork is emphasized by the brightness of the paint, as seen in the delicate impasto of the dove, an emblem of hope as well as truth. The rainbow, bible and dove are also traditional Christian iconography for the holy Trinity associated with the Virgin Mary, herself a symbol of truth and purity. The blue drapery upon which Truth sits, is reminiscent of the blue costume typical in depictions of the Virgin. Ward's ghoulish personifications of Ignorance, Envy and Jealousy are taken from traditional emblematic literature such as Ripa's Iconologia and Alciati's Emblemata (see Edward J. Nygren, op.cit.)

In later years the painting was mistaken as a depiction of Miranda and Caliban from The Tempest, Shakespearean scenes being popular subjects within the Romantic movement. In this context, the bestial head of Calumny could be compared to Fuseli's depiction of Bottom as an ass in Titania, Bottom and the Fairies (1793-4). A more likely parallel is found in the bat-like monster with serpent's tail and bull's head in Blake's The Great Red Dragon and the Woman Clothed in the Sun (Rosenwald Collection, National Gallery of Art, Washington).

Ward's satanic depiction of Calumny can be regarded as a distortion of the animal pictures he was famous for. In a painterly feat of lighting, Calumny bears a burning torch creating a hellish backdrop against which the monsters are silhouetted, in direct contrast to the luminosity surrounding Truth.

Ward initially trained as an engraver under his brother William Ward (1766-1826), and by the end of the eighteenth century was in great demand as a mezzotinter, translating works into print by the likes of William Beechey, Hoppner and Lawrence. It was around this time that he started experimenting in oils, perhaps influenced by his brother-in-law, the successful artist George Morland (1763-1804). By 1803, he had begun to paint on an ambitious scale, executing his famous Bulls Fighting, with a view of St. Donat's Castle in the background (Victoria and Albert Museum, London), in emulation of Rubens' Autumn Landscape with a view of Het Steen’ (National Gallery, London).

Ward continued to paint prolifically, honing his skills in oil, and was elected an Associate of the Royal Academy in 1807. By 1811 he was a full member, and in 1815, following the Duke of Wellington's victory at Waterloo and final defeat of Napoleon, he was commissioned by the British Institution to paint his Waterloo Allegory (now lost), a huge composition of 6.4 x 10.7 meters, completed in 1821. At this time the artist endured the loss of his wife and daughter, yet continued to paint successfully, one such composition being the Deer Stalker, c.1823, (Tate Britain, London). By 1830 he had retired to Cheshunt in Hertfordshire with his second wife, but continued to work on a grand scale, as evidenced by the present work. It was not until he suffered from a stroke in 1855 that Ward ended his prolific artistic career.