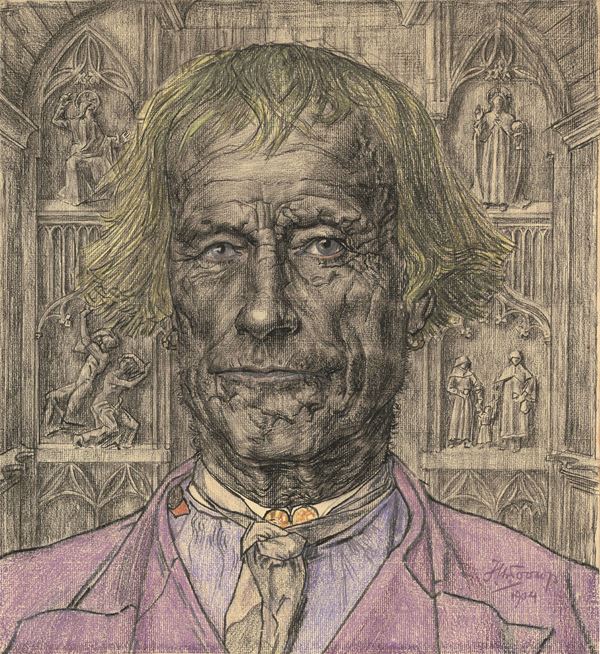 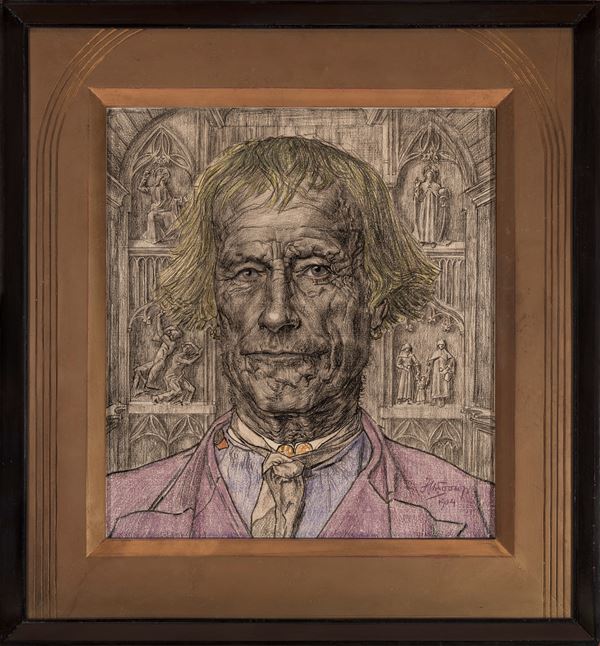 Portrait of an Old Peasant in Front of a Cathedral


Literature:
The drawing will be included in the Catalogue Raisonné being prepared by G.W.C. van Wezel.


Jan Toorop’s Portrait of an Old Peasant in Front of a Cathedral recalls the unsparing realism of 15th century Netherlandish portraits and Van Gogh’s images of the Postman Joseph Roulin.

Drawn in charcoal and color chalk, the elderly man sports a blond pageboy haircut and gold earrings. His creased face, wrinkled neck and bluish eyes and lips contrast uneasily with his lilac jacket and cravat. In the shallow space behind him are scenes from the Old and New Testament.

Born in Java to an Asian mother and a Ghanian father, Toorop moved with his family to the Netherlands in 1872. From 1882 to 1886 he lived in Brussels where he joined the artists group Les XX. This artist’s group was centered around James Ensor, with whom Toorop traveled to Paris in 1884. During these years Toorop worked in a variety of styles such as Realism, Impressionism and Neo-Impressionism before adapting an Art Nouveau style of willowy figures, curvilinear designs and personally symbolic Javanese motifs. He exhibited widely, including the 1900 and 1901 Secessionist exhibitions in Vienna. With his English wife, Toorop settled in the Dutch seaside town of Katwijk aan Zee, where he converted to Catholicism in 1905. Among his students was the young Piet Mondriaan.

Painters from Van Eyck to Freud remind us that looking at another’s face is a foundation of human discourse. With his riveting gaze and close-up pose An Old Peasant in Front of a Cathedral invites us to study the effect of time on human flesh and to look for good and evil in the human soul.

Portrait of an Old Peasant in Front of a Cathedral