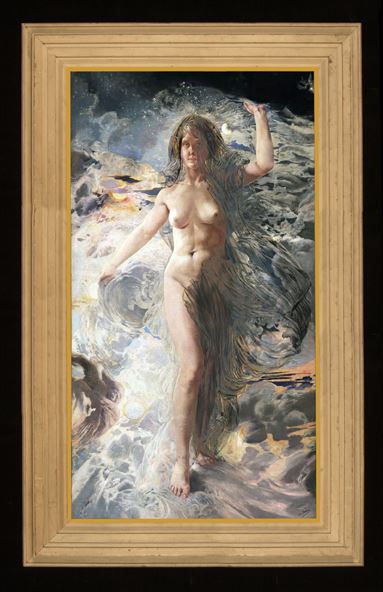 
Emerging from banks of clouds and sunbeams, the naked figure of Aurora stands before the viewer, separating the morning from the night. Surrounded by a series of moons, suns and an aureole of stars, and clothed in a diaphanous wind-blown garment covering half her face, the goddess of the dawn exemplifies the disturbing art of Léon Frédéric.
Painted in the early 1890’s, Frédéric exhibited Aurora in Munich in 1892 at the Secession exhibit, and in the tenth and final group show of Les XX in Brussels in 1893.

The son of a jeweler, Frédéric at age seven was sent from a crowded home to a Jesuit boarding school. Training to become a painter-decorator, he studied with Jean Portaels at the Brussels Academy. Failing to win the Prix de Rome, Frédéric nonetheless went to Italy from 1876-78, and saw works by Ghirlandaio and Botticelli, whose Birth of Venus may come to mind in front of Aurora. Later in life, Frédéric was praised for the technical virtuosity of his paintings: the enamel-like surfaces of his figures and the carefully painted landscapes - traits shared with 15th and 16th century Netherlandish painting. The moon-face of Aurora, in fact, is reminiscent of the Madonna’s of Robert Campin and Gerard David.

Returning to Brussels, Frédéric painted his early masterpiece, The Chalk Maker’s Family. Exhibited to great acclaim at the Brussels’s Salon in 1882, the giant triptych shows a poor family of chalk sellers setting out for work, having a modest noontime meal, and then returning home. At the outskirts of a city, amidst empty fields and barren trees, the shoeless children bring home Frédéric’s message of empathy for the working poor - a common subject of the time. Owned by the Musées royaux de Beaux-Arts in Brussels, this painting is a landmark of Belgian 19th century art.

With the founding in 1884 of Les XX and its annual February exhibition, Brussels became a cosmopolitan center for avant-guard painting. Under the direction of Octave Maus, many foreign artists, known as invités, exhibited alongside local members. Over a decade, these exhibitions featured Impressionism, Neo-Impressionism, Symbolism and the Decorative Arts. The 1886 exhibition, for example, featured the works of Monet and Renoir. The following year, Seurat’s La Grande Jatte was shown, and in 1892, a memorial exhibit to him included nineteen works. Rodin, Signac, Whistler, Redon, Liebermann, Segantini, Sargent, Lautrec, Cézanne, Ensor, Khnopff, Van Rysselberghe, Gauguin and Van Gogh were a few of the artists to exhibit with the Les XX in Brussels.

In this inclusive setting, critics saw thematic connections between Neo-Impressionism and Symbolist paintings. Symbolism had strong literary underpinnings in novels and poems by such writers as Baudelaire and Mallarmé. Wagner was a musical inspiration. Influenced by the Pre-Raphaelites in England, Symbolist art took hold throughout Europe with Moreau, Puvis de Chavannes and Redon in France; Stuck and Klinger in Germany; and Klimt and Kubin in Austria leading the way. After an 1877 meeting in Paris with Moreau, Khnopff returned to Brussels and painted eerie townscapes of Bruges and morbid portraits of his sister, Marguerite. Sharing a similar obsession with women, Félicien Rops made erotic illustrations for books. Also active in this fertile milieu were James Ensor, Jean Delville, George Minne, Émile Fabry, Xavier Mellery and William Degouve de Nuncques.

Today, a wider appreciation of Frédéric’s originality has begun. His Symbolist masterpiece, the giant triptych The Stream, featured prominently in the Guggenheim Museum’s 2000 exhibition 1900 Art at the Crossroads. With its scores of naked children and swans, the painting unnerved or impressed the public and critics unfamiliar with his hyper-real style and obscure subject matter (dedicated to Beethoven). In the late 1990’s the Philadelphia Museum of Art bought a series of four of his paintings, while in France, the musée d’Orsay owns several works by him.

In excellent condition, Aurora was painted at the same time as The Stream – the 1890’s. It can be compared with the best Symbolist art in Belgium or throughout Europe, but its true visual home lies in a distant time and place - the image-charged present.