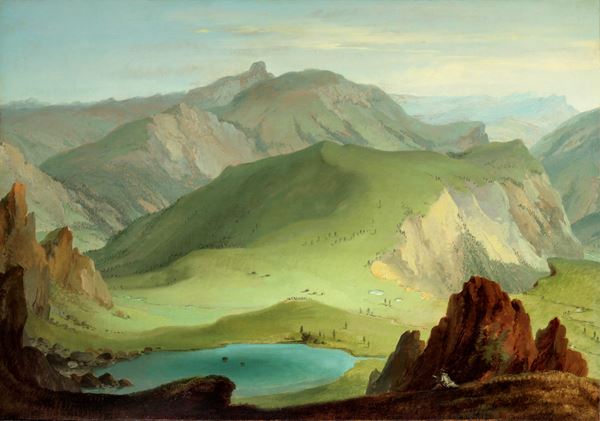 View from the Muntigalm across Lake Seeberg towards the Stockhorn Chain

To reach the summit of the 2077-meter-high Muntigalm, Caspar Wolf and his companions would have set out in the early morning on their difficult climb. Arriving around noon and undoubtedly after lunch, the artist would get to work making pencil studies and oil sketches for paintings to be completed in the studio.

In a View from the Muntigalm, Wolf depicts a sweeping panorama of a green plateau dotted with fir trees, tiny figures and mountain huts, and crossed by streams running into the blue Lake Seeberg. Jagged rocks frame a view of the Bernese Oberland, which diagonally recede as far as the eye can see. From a bird’s-eye view, Wolf telescopes the topography, enhancing the pictorial effect of this Alpine Arcadia. In the center distance – resembling Cézanne’s Mont Sainte-Victoire, the silhouette of the Stockhorn rises into the summer sky.

The son of a carpenter, Wolf was born into modest circumstances in the town of Muri. He received early commissions from the abbey there, but soon left to study in Augsburg and Munich. Between 1769-71, Wolf was in Paris, working alongside Phillipe-Jacques de Loutherbourg and absorbing the influences of Carle Joseph Vernet’s shipwreck paintings as well as François Boucher’s and Hubert Robert’s lushly colored Rococo landscapes.

Wolf’s breakthrough came in 1773 when he was introduced to the Bernese publisher Abraham Wagner, who was looking for an artist to illustrate his encyclopedic work on the Swiss Alpine landscape, Merkwürdige Prospekte aus den Schweizer-Gebürgen (Remarkable Views of the Swiss Mountains.) Wagner had hired the Alpine naturalist Jakob Samuel Wyttenbach to contribute scientific research to this project. Between 1773 and 1777, the three men made six extensive excursions to both accessible and difficult to reach sites in the High Alps. In addition to the illustrations, Wolf completed more than 170 paintings that Wagner presented as an ensemble in his home. Visitors to “Wagner’s cabinet” could order replicas of Wolf’s paintings in gouache or oil. In 1779, Wagner exhibited his “Cabinet” in Paris, but received little attention.

As the leading painter of mountain scenery, Wolf’s subjects include waterfalls, caves, bridges, glaciers and panoramas. While the Alps appear in the background of certain Renaissance paintings – most famously those by Leonardo – for the most part, they were considered home to mythical creatures, where agricultural life in tiny villages was extremely difficult. As the concept of the Sublime took hold in the 18th-century, writers, artists and those taking the Grand Tour increasingly appreciated the grandeur and power of the Alps, and re-evaluated man’s role in nature. In its clarity, precision and restraint, our painting anticipates those by Caspar David Friedrich (1774 – 1840), where a solitary figure often meditates over a vast expanse, or where a mountain chain rises behind a wide green plain. Such pantheistic themes became hallmarks of 19th-century Romantic landscapes.

Juxtaposing smooth and textured brushstrokes, green valleys and limestone cliffs, View from the Muntigalm has a sensual beauty that reveals Wolf’s affection for the scenery, as well as his own humanity. Having reached the mountaintop in the clear Alpine air, Wolf knew the scene before him was a work of art.

View from the Muntigalm across Lake Seeberg towards the Stockhorn Chain