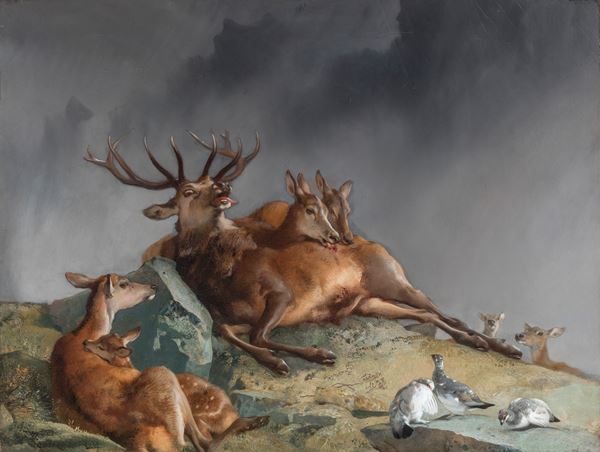 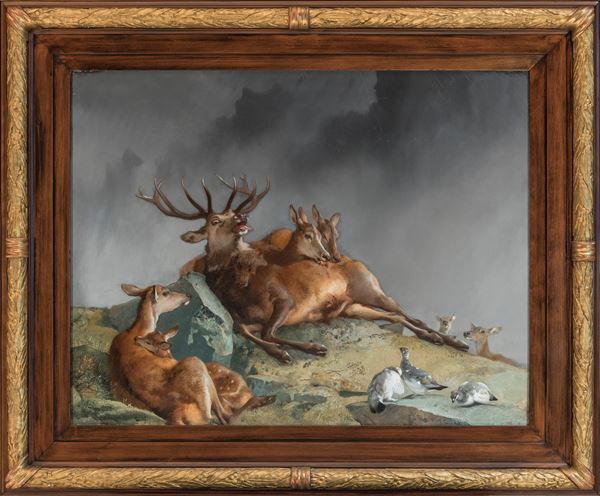 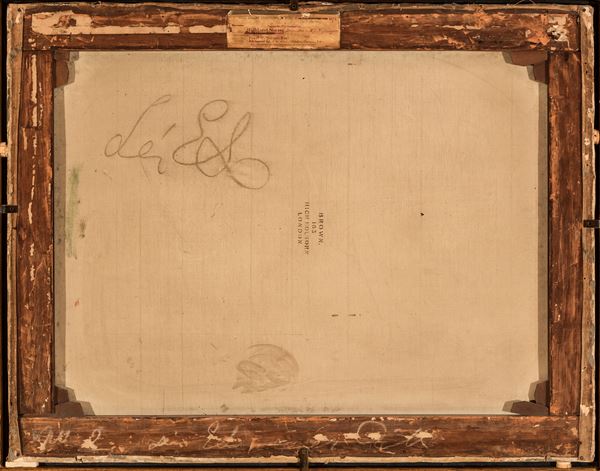 In Sir Edwin Landseer’s The Highland Nurses, a twelve-point stag rolls its eye and extends its tongue in the death-grip of having been shot. Two does lick its wound, explaining the title of the painting and its dedication to Florence Nightingale, the famous nurse.

Landseer first visited Scotland in 1824. Deeply impressed by the landscape and sympathizing with the harsh existence of the Highlanders, he returned every fall to hunt and sketch. Highland subjects became his specialty, and in particular paintings of the Highland deer. Beginning in 1838, Landseer painted the definitive images of these animals, which include The Challenge (Alnwick Castle) of 1844 and The Monarch of the Glen (J. Dewars and Co.) of 1851. These are some of the best-known British paintings of the nineteenth century. Transcending animal painting and sporting art, these paintings encompass larger Romantic themes, such as the overwhelming beauty of nature as well as its pitiless cruelty. With its curtain of gray clouds setting the mood, these themes are present in The Highland Nurses.

In 1855, a year after painting The Highland Nurses, Landseer exhibited nine works at the Exposition Universelle in Paris, receiving a gold medal. The critics Baudelaire, Charles Blanc and Théophile Gautier praised him for his knowledge of animal form and their inner spirit. In 1821, Géricault on a visit to London wrote about the then eighteen-year-old prodigy. Another artist to paint deer with great sympathy was Gustave Courbet. In his famous painting The Hunted Stag of 1861 in Marseilles, Courbet repeats the pose of the stag from The Highland Nurses. Perhaps Courbet knew the print after the picture, which was engraved by the artist’s brother Thomas Landseer in 1858. (For a discussion of Landseer’s reception in France see J. Rischels essay Landseer and the Continent in the 1981 Philadelphia Museum Landseer exhibition and the 2003-4 Constable to Delacroix catalogue, no.94, P. Noon). Prints after Landseer’s paintings contributed to his enormous popularity in England and Europe, and to his income.

Combined with his artistic skills, Landseer’s winning personality brought him friendships with many aristocratic, land-owning patrons, including Queen Victoria and Prince Albert. The royal couple was also enamored with Scotland and exchanged gifts of Landseer paintings. Landseer visited Balmoral in 1850 and was knighted that year. When he died in 1873, Landseer was the most famous artist of his generation, and was buried in St. Paul’s Cathedral alongside Reynolds, Lawrence and Turner.

Like many Landseer paintings, The Highland Nurses can be interpreted in human terms: here as an allegory of a dying hero or father surrounded by his loving family. The pose of the stag is familiar from history painting, religious and mythological art, war memorials, the daily newspaper and the movies. A triangle is formed with the hinds that minister to the stag or look on from the wings. The stag’s antlers are silhouetted against the sky and its legs are bent in front and extended outwards in the rear. In the foreground, three ptarmigans that have turned white for the winter peck the ground for food, one of them raising its head to watch the central drama.

Landseer claimed that he actually witnessed such a scene. In the 1875 memorial exhibition, The Highland Nurses is discussed in the catalogue as follows: ‘Sir Edwin, after a day’s stalking, fired a random shot to empty his rifle barrel. At midnight, the keeper called him up, the night being moonlight (sic) to shew (sic) him the incident as painted.’ The image Landseer created is a powerful illustration of beauty, tenderness and suffering.