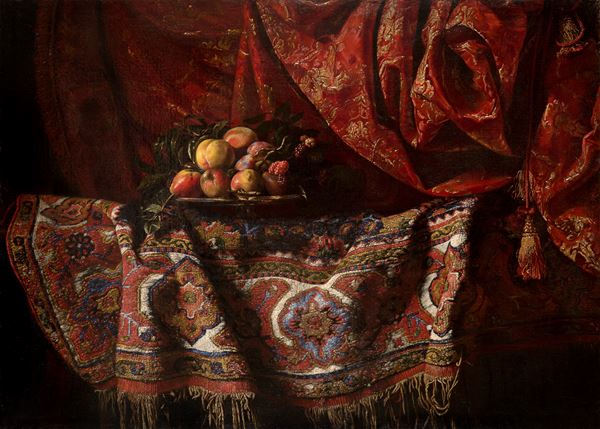 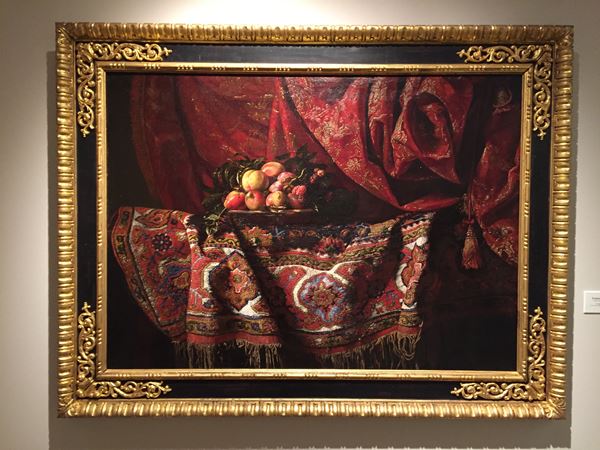 Noletti’s name has only recently been discovered on a print. Born in Valetta, Malta, he is often referred to as Il Maltese; other times he has been identified as Francesco Fieravino or Il Maestro dei Tappeti (carpets). Active in Rome from 1640 until his death in 1654, Noletti transposed these scene-stealing accessories to the walls of grand palazzos. Painted in tactile high relief, Noletti’s still lifes were different from those done in Naples or Milan. Though less celebrated than his Spanish or Dutch contemporaries, eight still lifes by him were in the 1777 sale of the Prince de Conti’s collection in Paris. In his Chronological List of Modern Painters, Joshua Reynolds referred to the artist as Il Maltese (vases, carpets, still-lifes).

Sometimes called a Holbein or Lotto carpet, Turkish carpets were emblems of luxury and trade. They are shown covering walls and furniture in 15th century Netherlandish religious paintings, 16th century Venetian portraits, and 17th century cabinet pictures by the Dutch fijnschilders. In this close up view, Noletti emphasizes the warp, weft and pile of the wool fabric. Instead of reasonably priced azurite, he exclusively used ultramarine, suggesting a correlation between expensive pigment and the elements depicted.

In Rome, Noletti may have drawn inspiration from grandiose, richly colored court portraits, such as Velasquez’s Innocent XII and Van Dyck’s Cardinal Bentivoglio. He anticipated the appeal of Turkish subjects during the Napoleonic era and for 19th century Orientalist artists. Early in the 20th century, Henri Matisse picked up the rich legacy of Islamic designs. Using his extensive textile collection, he balanced the human figure with highly patterned backgrounds. Describing his 1911 Red Studio painting (MoMA), he wrote: “I find that these things only become what they are to me when I see them together with the color red.”

The juxtaposition of an Eastern carpet with a Western curtain may have been a veiled reference to the tensions with the Ottoman Empire. These tensions persist, but so does the globalization of art. Outward magnificence and lurking danger – hallmarks of the High Baroque – also characterize the hyper-visual present. Noletti’s still life is a seductive image of pattern, color and cross-cultural exchange.