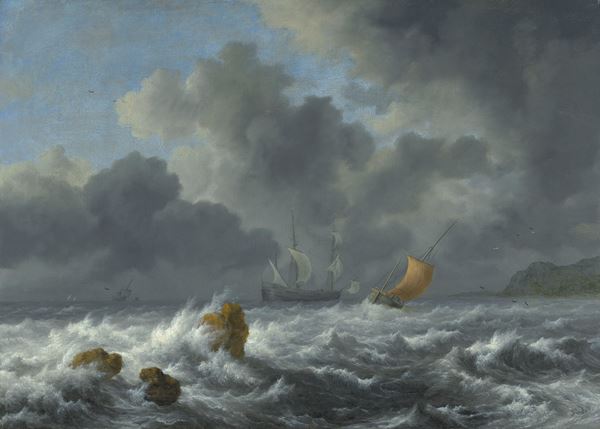 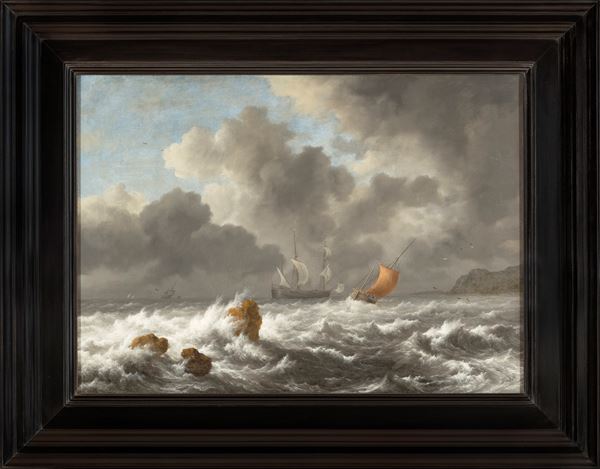 Sailing Vessels in a Stormy Sea

The immensity of space and the power of the elements are beautifully depicted in Jacob van Ruisdael’s Sailing Vessels in a Stormy Sea, one of twenty marine paintings known today by the preeminent landscape artist of the Dutch Golden Age. At the intersection of sea and sky, white surf sprays off rocks, crossing the horizon on which boats traverse under westerly gales. The waves have a calligraphic freedom in an ever-changing arrangement of crests and troughs. In this silvery world, the fate of the sailors, the shapes of the clouds, the gusts of the wind, and the pull of the tides are controlled by a higher power.

Born in Haarlem into a family of painters and frame makers, Ruisdael was an accomplished artist by age seventeen and joined the painter’s guild in 1646. A 1652 trip to the Dutch-German border with Nicholaes Berchem was the springboard for the artist’s views of Bentheim Palace, which aggrandized lowly hills into monumental compositions. Together with the Nordic subjects of Allart van Everdingen, this trip inspired Ruisdael’s paintings of timber wrapped mills, tall pines and crashing waterfalls. In 1721, Ruisdael’s first biographer Arnold Houbraken praised these waterfall paintings and the artist’s rare marines: Ruisdael “could also depict the sea, and when he chose, a tempestuous sea with violent waves lashing against rocks and dunes. In this type of painting he was one of the very best.”

Dutch 17th century marine paintings underscore the importance of fishing and seafaring trades as the basis of the economy, commemorate naval battles and reflect the constant threat of flooding. On occasion, they are understood as allegories of the vicissitude of love. The atmospheric, tonal paintings of Jan Porcellis and Simon de Vlieger were precedents for Ruisdael’s beach scenes and marines. Seymour Slive wrote: “There are also significant differences: Ruisdael has given a greater unity to the large shadowed expanse of the sea in the foreground, the contrasts between light and dark areas have become much sharper, clouds have gained volume, his touch is stronger and his paint heavier than is found in the seascapes done by his predecessors.”

Moving to Amsterdam in 1656, Ruisdael, in his large and varied oeuvre, painted such masterpieces as the Mill at Wijk and The Jewish Cemetery. In smaller panoramas of the bleaching fields outside Haarlem (Haarlempje), he matches the openness of the composition with a delicate touch for details. As in our painting, which Slive dates to 1670, majestic clouds dwarf human activity.

Ruisdael’s depiction of all-encompassing nature and heroic seafaring influenced the marines of J.M.W. Turner. Here, the composition has an Asian simplicity and refined color harmonies. Between the churning waves and angry clouds, a strong wind pushes us either towards safety or onto shoals. In this fury, the artist shares the beauty and terror of a transient world.

Sailing Vessels in a Stormy Sea