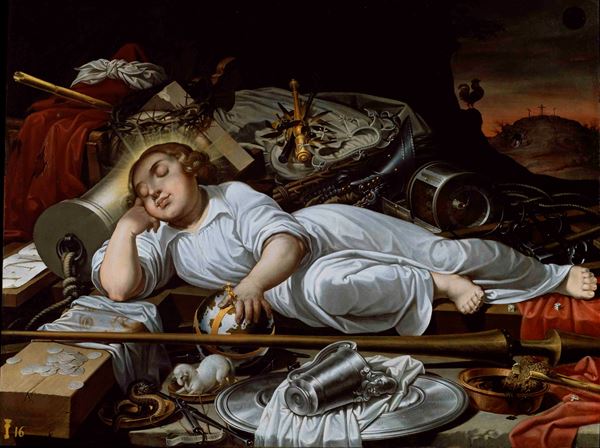 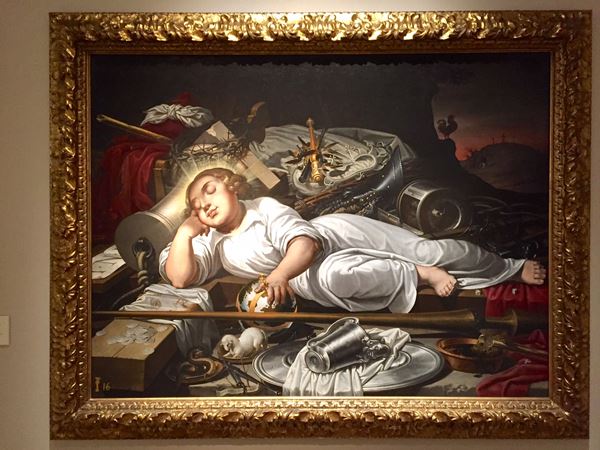 
Sleeping Christ Child was painted by an artist influenced by Jacques Bellange, the gifted and idiosyncratic 17th century artist from Nancy. The bulging eyes, pneumatic limbs and enigmatic smile are hallmarks of Bellange’s style. The Christian symbols, here numbering over thirty, and unusual halo are also characteristics of the Lorrain school.

The Colonna inventory mark in the lower left corner suggests that the Sleeping Christ Child was painted in Rome. There is a pagan quality reminiscent of depictions of Eros, the god of love, as a pudgy winged baby. Perhaps the artist saw a Hellenistic bronze of this subject or Caravaggio’s Sleeping Cupid.

A talented still-life painter, the artist conveys the texture of wood, linen, stone and metal, within an arrangement of complicated geometric forms. Though the nails and crown of thorns are menacing, there is a humorous aspect in such details as the lamb facing off with a dragon.

On the basis of a drawing of an Amazon in the Morgan Library, an attribution to Claude Deruet (1588-1660) has been suggested. Other artists including Pierre Brebiette (1598-1650) and Martin Fréminet (1567-1619) have been proposed. In the Colonna inventories there are references to paintings of this subject - which had a brief moment of popularity at the beginning of the 17th century - but their authorship are tantalizing anonymous.

It is therefore left to the viewer to appreciate the painting’s humor, carnality and troubling originality.