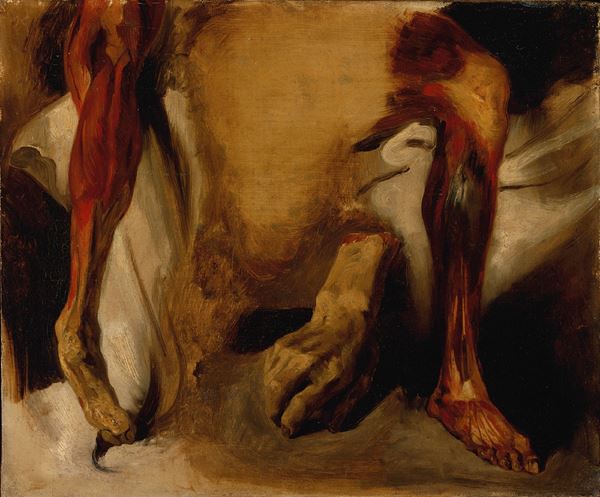 A Severed Hand and Two Ecorchés of a Leg

Delacroix may have used our study while working on his first masterpiece of 1822,
The Barque of Dante. In the lower right of that painting, a drowning man grabs the beard of a second drowning man, with a hand that recalls in reversed position the central motif of our picture.

More than thirty years latter, Delacroix wrote in his Journal of 1857 “As I was having luncheon today, two pictures ascribed to Géricault were brought to me to give an opinion on. The small one is a very indifferent copy; costumes of Roman beggars. The other is an amphitheatre subject; arms, feet, etc. also dead bodies; it is admirable in strength and relief, with those careless lapses so characteristic of the painter`s style, and which further increase its value. … The fragment by Géricault is truly sublime; it more than ever proves that there is neither serpent nor horrible monster, etc., and is the best possible argument in favour of the Beautiful, as it should be understood.”

A Severed Hand and Two Ecorchés of a Leg