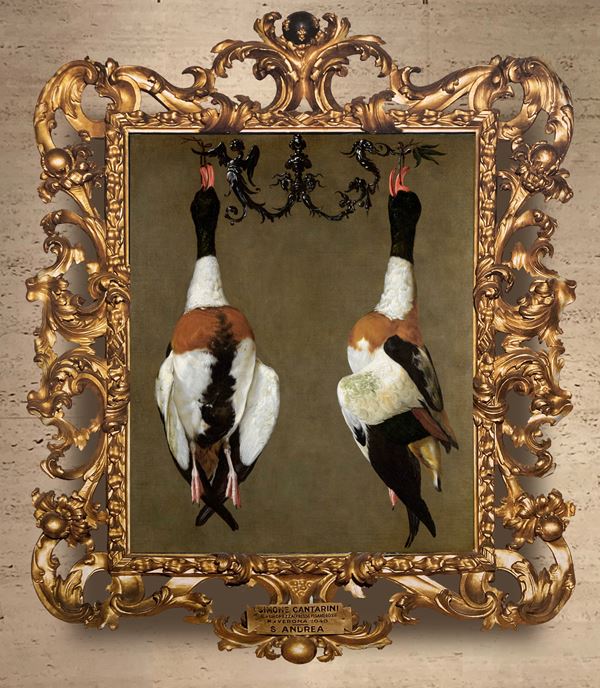 
A pair of hanging shelducks may seem an unlikely motif to prompt thoughts of beauty, transience and abstraction, but these life-size birds, their breasts rotating towards each other in a pas de deux, remind us that a humble subject is no impediment to great art.

Shown in profile and straight on, the double portrait of a shelduck was painted by the Florentine Seicento artist Cesare Dandini, whose subjects include Madonnas, magdalens and saints, but rarely still lifes. Painted between 1637 and 1647, The Medici Shelducks was recorded in the 1647 and 1663 inventory of Cardinal Giovan Carlo de’ Medici (1611– 1663) [1]. Following his death, the painting was sold at auction, finding its way centuries later to a Midwestern collection. It’s appearance and publication in 1989 prompted discussion about the authorship of a famous and closely related gamepiece in the Galleria degli Uffizi, Two Female Goosanders, heretofore given to Dandini (2). It is now accepted that our painting is by Dandini and the much publicized and exhibited Uffizi painting is by the Flemish painter Giusto Sustermans and belonged to a different member of the Medici family (don Lorenzo de’ Medici 1599 – 1648, Villa della Petraia) (3). The two paintings are so similar in composition as to be considered pendants.

Tuscan 17th century still life painters specialized in kitchen scenes crowded with hanging fowl. Here, the realism and simplicity are more in tune with Spanish still lifes by Juan Sanchez Cotan and Francisco de Zuburan. Suspended from a fantastical metal bracket whose branches end in a winged woman and a dragon, the ducks are brought into trompe l’oeil relief by the grey background and the Medici style frame (4). Following its genetic code, snow-white feathers alternate with bands of black and orange plumage in a rhythm that ends in accents of red. The streamlined curves and tactile brush strokes anticipate French 17th and 18th century still lifes by Alexandre-Franćois Desportes, Jean-Baptiste Oudry and Jean-Baptiste Chardin.

Recently alive, The Medici Shelducks invite us to measure space, remove the unessential and savor the beauty and brevity of our visual experience.