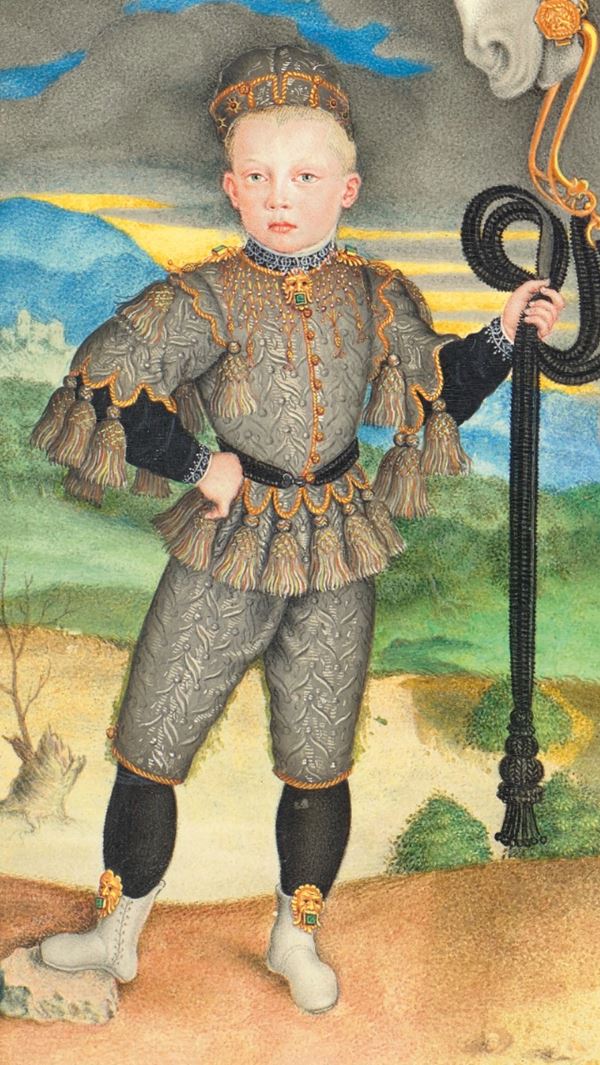 A Rearing White Horse Held by a Boy

Despite the exceptional quality of execution of this intriguing work, no convincing attribution for it or for two works by the same hand have so far been proposed. However, it has been possible to shed some light on the context of their creation. A drawing in the Albertina (fig. 1; inv. 13583; see T. Vignau-Wilberg in Bosch, Bruegel, Rubens, Rembrandt. Meisterwerke der Albertina, exhib. cat., Vienna, Albertina, 2013, no. 73, ill.), made on a piece of vellum of approximately the same size as the Kasper sheet but enlarged at left, shows a dark-haired boy in identical dress as the blond boy in the Kasper sheet, standing in a similar landscape and holding a black horse, saddled and tacked in extremely luxurious attire. The breeder’s mark on the animal’s rump has been identified as that of Jan Šembera, who became Baron of Boskowitz and Schwarzenberg in 1584 (for him, see the literature quoted in E. Fučiková, ‘Historisierende Tendenzen in der rudolfinischen Kunst – Beziehungen zur älteren deutschen und niederländischen Malerei’, Jahrbuch der kunsthistorischen Sammlungen in Wien, LXXXII-LXXXIII, 1986-1987, p. 195, n. 28). The mark ‘ISS’ refers to Jan Šembera of Schwarzenberg and allows us to date the drawing between 1584 and Šembera’s death in 1597.

At the same sale where the Kasper drawing reappeared, another work by the same hand was offered and was acquired by the Getty Museum (fig. 2; inv. 2013.57; lot 9 in the 2013 sale). Although it does not include a boy, there can be no doubt it belongs to the same group as the two others; indeed, stitching holes in the lower margin of the three drawings indicate they must once have been bound in an album, which very probably contained more, similar works. Šembera was known to be a horse lover and rider, and he had his palace in Bučovice in Southern Moravia decorated with mounted mythological and historical figures. The three gouaches partly must have had a documentary role and undoubtedly record horses in his stable. As Šembera died childless, the boys in the Kasper and Vienna drawings are most likely to be young grooms from his household; their lavish clothes give an indication of how passionate the owner was about the care of his horses.

Naturally, Šembera must have looked to the many outstanding artists active at the court of Rudolf II in Prague when he wanted to commission the portraits. Otto Benesch placed the Albertina drawing, which had previously been given to Lucas van Valkenborch, in the circle of the Netherlandish miniaturist Joris Hoefnagel, and an attribution to his son Jacob has been proposed for the Albertina drawing (Die Zeichnungen der niederländischen Schulen des XV. und XVI. Jahrhunderts, Vienna, 1928, p. 35). It is indeed possible that they are the work of a Netherlandish artist active in Prague; the landscape in particular seems to fit in a tradition going back to artists such as Hans Bol. In the Getty and Albertina works, the anonymous draftsman showed his exceptional skills in depicting animals and landscapes, but it is in the Kasper drawing that he seems to have created his masterpiece: an image as arresting for its accuracy and detail, as for its brooding, enigmatic atmosphere.

A Rearing White Horse Held by a Boy