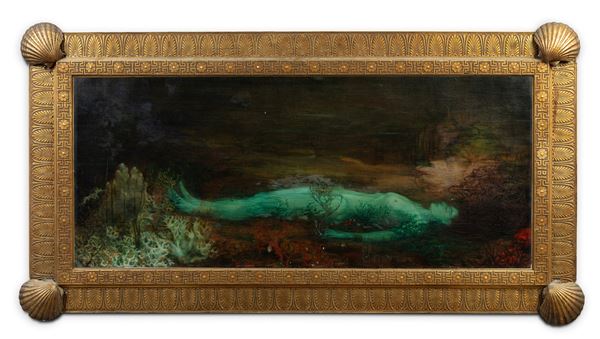 
There are countless representations of Ophelia, whom Shakespeare created for Hamlet, in music, drawing, sculpture and painting. In turn, she inspired the Romantics and the Symbolists, who most often represented her, as in the present painting, at the moment of her drowning (act IV, scene 7). The Symbolist artists at the turn of the nineteenth century, fascinated by legends, fantasy and archetypal female figures, found a theme that matched their aspirations in this rejected lover, whose anguish causes her madness and eventually drives her to suicide.

The motif of Ophelia’s drowned body provides an opportunity for poetically expressing the cure for melancholy prescribed by the Symbolists: a recourse to beauty, nature and fantasy. Like Odilon Redon (1840-1916), in the same period, Georges van Haesendonck  paints the unfortunate daughter of Polonius in a fantasy setting and with unreal flesh tones. This extraordinary image of Ophelia under water, completely submerged at the bottom of the sea (whereas in fact she drowned in a river) contrasts sharply with the traditional Romantic iconography. The young woman seems to be sleeping peacefully on a bed of aquatic plants, surrounded by coral, in an imaginary vision which is a perfect example of those symbolist works where strangeness and the supernatural take precedence over the human aspect.